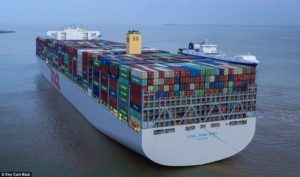 Containerization is a stowage operation in containers or “intermodal containers”, “shipping containers”, “ISO containers”, etc.)
More generally, it refers to the container-based freight transport system, particularly in the maritime transport sector. Containers are made with standard sizes and can be loaded and discharged, stacked, transported efficiently over long distances and transferred from one means of transport to another, such as container ships, railway trucks and lorries, without being opened. The system was developed after the Second World War, leading to a significant reduction in transportation costs, damage to goods and theft, sustaining a significant increase in international trade. Obviously, for some bulk products, containerisation is impracticable.

Containers first appeared in the United States in the 1950’s. There are different sizes, but international standardisation has led to the spread of 20′ containers (twenty feet: 6.058 m and 40′ forty feet containers: 12.192 m) 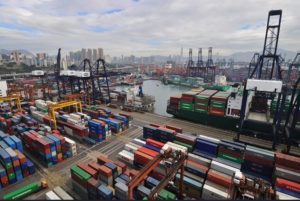 The 20′ container is considered the base measurement unit for container shipments, defined as the 20-foot equivalent unit (TEU). The system was developed after the Second World War, leading to a significant reduction in transport costs, thefts and damage due to the handling of products during transport. Reduction in the handling of individual products has led to a significant increase in international trade. The distribution chain has been simplified, the product remains inside the container from when it leaves the manufacturer to when it is delivered to the final customer. Containers are shifted automatically in a standardized manner using specific handling tools. These containers are mainly intended for the transport of manufactured goods, but they can also transport other products: such as fruit and vegetables, finished food products, liquids or cars, using specific containers – such as tank or refrigerated containers (reefers) or other – but always of standard dimensions. Shipments in containers are handled on the basis of who loads the goods: goods with a single recipient and goods with more than one final recipient. 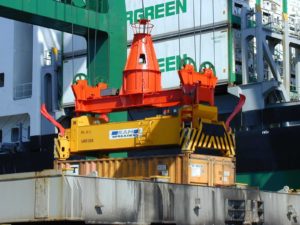 When the goods shipped are destined to a single recipient, full load shipment is used, this is called full container load (FCL). FCL shipments are usually preferred by those who have large quantities to ship to a single receiver. FCL container does not mean that the container is loaded to the maximum weight or volume allowed but it means that there is only one shipper.

Container booking for partial shipments can be provided for small, non-exclusive shipments. For this reason, the container booking can also be organised for more than one recipient. In this case we are talking about less than container load (LCL). So if the goods to be shipped are not enough to fill a standard load container, we proceed with grouping the goods with other cargoes bound to the same destination at a Container Freight Station (CFS)

SERVICE EXPORT FULL CONTAINER & GROUPAGE FOR DUBAI and in continuation:

SERVICE EXPORT FULL CONTAINER & GROUPAGE FOR SINGAPORE and in continuation: